This C++ library provides a framework to create BehaviorTrees. It was designed to be flexible, easy to use and fast.

Even if our main use-case is robotics, you can use this library to build AI for games, or to replace Finite State Machines in you application.

BehaviorTree.CPP has many interesting features, when compared to other implementations: 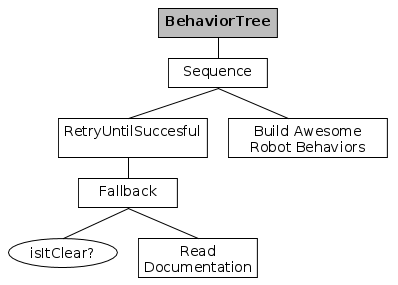 If this documentation doesn't answer your questions or if you simply want to connect with the community of BT.CPP users, visit discourse.behaviortree.dev.

What is a Behavior Tree?

A Behavior Tree (BT) is a way to structure the switching between different tasks in an autonomous agent, such as a robot or a virtual entity in a computer game.

BTs are a very efficient way of creating complex systems that are both modular and reactive. These properties are crucial in many applications, which has led to the spread of BT from computer game programming to many branches of AI and Robotics.

If you are already familiar with Finite State Machines (FSM), you will easily grasp most of the concepts but, hopefully, you will find that BTs are more expressive and easier to reason about.

The main advantages of Behavior Trees, when compared to FSMs are:

"Ok, but WHY do we need BehaviorTrees (or FSM)?"

Many software systems, robotics being a notable example, are inherently complex.

The usual approach to manage complexity, heterogeneity and scalability is to use the concept of Component Based Software Engineering.

Any existing middleware for robotics took this approach either informally or formally, being ROS, YARP and SmartSoft some notable examples.

A "good" software architecture should have the following characteristics:

If we don't keep these concepts in mind from the very beginning, we create software modules/components which are highly coupled to a particular application, instead of being reusable.

Frequently, the business logic is "spread" in many locations and it is hard for the developer to reason about it and to debug errors in the control flow.

To achieve strong separation of concerns it is better to centralize the business logic in a single location.

Finite State Machines were created specifically with this goal in mind, but in the recent years Behavior Trees gained popularity, especially in the game industry.