Unlike a Finite State Machine, a Behaviour Tree is a tree of hierarchical nodes that controls the flow of execution of "tasks".

"To invoke the callback tick() of a TreeNode".

In a service-oriented architecture, the leaves would contain the "client" code that communicates with the "server", that performs the actual operation.

To mentally visualize how ticking the tree works, consider the example below.

A Sequence is the simplest ControlNode: it execute its children one after the other and, if they all Succeed, it returns SUCCESS (green) too. 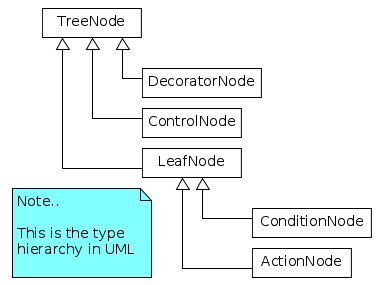 In the context of ActionNodes, we may further distinguish between synchronous and asynchronous nodes.

The former are executed atomically and block the tree until a SUCCESS or FAILURE is returned.

Asynchronous actions, instead, may return RUNNING to communicate that the action is still being executed.

We need to tick them again, until SUCCESS or FAILURE is eventually returned.

To better understand how BehaviorTrees work, let's focus on some practical examples. For the sake of simplicity we will not take into account what happens when an action returns RUNNING.

We will assume that each Action is executed atomically and synchronously.

Let's illustrate how a BT works using the most basic and frequently used ControlNode: the SequenceNode.

The children of a ControlNode are always ordered; in the graphical representation, the order of execution is from left to right.

Have you spotted the bug?

If the action GrabBeer fails, the door of the fridge would remain open, since the last action CloseFridge is skipped.

Depending on the type of DecoratorNode, the goal of this node could be either:

The node Inverter is a Decorator that inverts the result returned by its child; An Inverter followed by the node called isDoorOpen is therefore equivalent to

The node Retry will repeat ticking the child up to num_attempts times (5 in this case) if the child returns FAILURE.

Apparently, the branch on the right side means:

Have you spotted the bug?

If isDoorOpen returns FAILURE, we have the desired behaviour. But if it returns SUCCESS, the left branch fails and the entire Sequence is interrupted.

We will see later how we can improve this tree.

FallbackNodes, known also as "Selectors", are nodes that can express, as the name suggests, fallback strategies, i.e. what to do next if a child returns FAILURE.

It ticks the children in order and:

In the next example, you can see how Sequences and Fallbacks can be combined:

Is the door open?

If not, try to open the door.

Otherwise, if you have a key, unlock and open the door.

If any of these actions succeeded, then enter the room.

"Fetch me a beer" revisited

We can now improve the "Fetch Me a Beer" example, which left the door open if the beer was not inside the fridge.

We use the color "green" to represent nodes which return SUCCESS and "red" for those which return FAILURE. Black nodes haven't been executed.

Let's create an alternative tree that closes the door even when GrabBeer returns FAILURE.

Both these trees will close the door of the fridge, eventually, but:

Everything works as expected if GrabBeer returns SUCCESS.